I succumbed to hedonism.

People don’t tend to give away great art for free. Last year my girlfriend gave me an illustration of an album cover she’d done, which was nice. Before that, I was given an illustration of a hypothetical scenario in which Morrissey hadn’t become the racist former lead singer of a band and had instead forged a life for himself as a racist who works in a call centre. I hate Morrissey now, but I still consider it a great piece of art.

Prior to those examples, the last truly great piece of art I enjoyed for free was an iOS port of an old Flash game that, according to its developers website (genuinely little more than a Google Doc spreadsheet), dates back to 2011.

When PEOWW was a regular thing, we never really paid much mind to iOS titles. Things haven’t changed all that much since really – the vast majority, if not all as far as we can tell, now little more than a cynical ploy to con strapped-for-cash parents in to shelling out for ‘loot’ for little Timmy’s Bullshit Simulator 2K18.

I haven’t played a console shooter for a while, so I don’t really know what that means, but I do know it’s bad and I’m happy to tar 99.9% of your iPad’s free gaming output with the same brush that EA and Blizzard have been for the past twelve months.

Ostensibly, Bonkey Trek is a side-scrolling adventure in which a nameless protagonist must navigate a barren landscape in search of his true love. He is accompanied by his trusted Bonkey – a beast unquestionably nobler than a humble donkey, though infinitely more fragile. 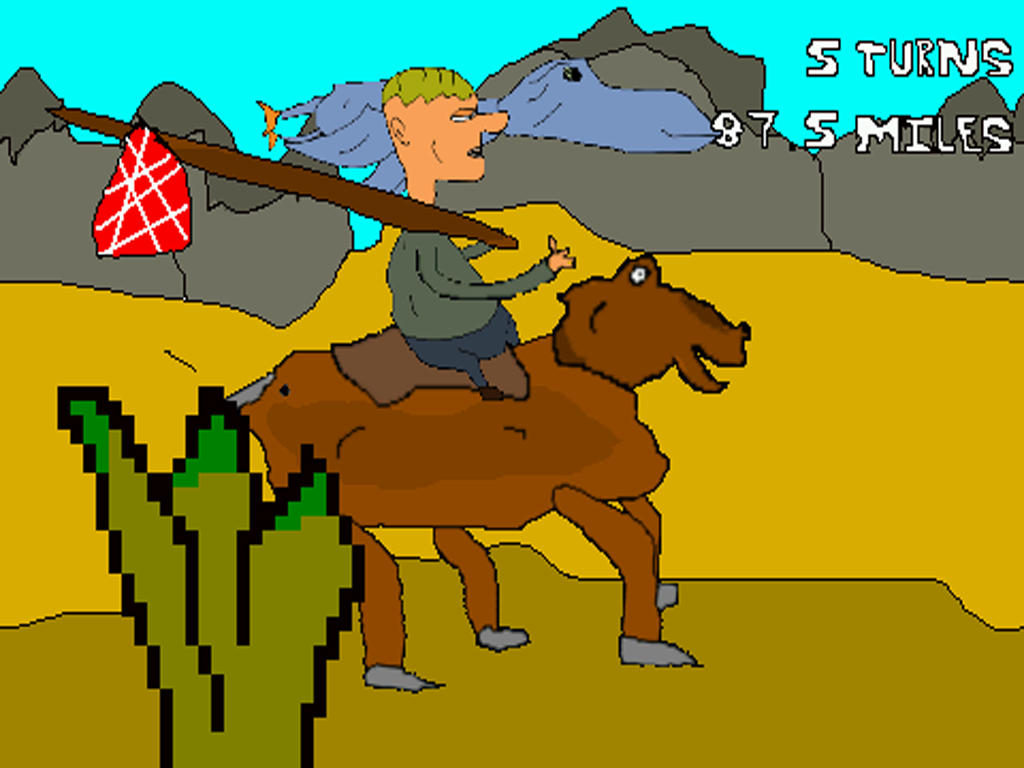 Pull back to pat Bonkey slightly and he’ll move a few miles (we told you a Bonkey was better than a donkey). Pull harder to punch Bonkey and he’ll travel further. But careful with bonkey, now. Pull back too hard, too often or go too long without feeding Bonkey and you’ll find he you take his head clean off or he starves to death. Bonkeys are notoriously fragile after all.

To reinvigorate Bonkey you must ply him with items from your bag. A few miles in to your journey, however, you’ll find that our protagonist hasn’t thought things through. Very little of the contents are useful. A tin can will kill Bonkey – he’ll cut ‘his whole lips and mouth on it’. A cheese rind will barely sate him. A carrot will restore him to full health. You inexplicably have just one carrot to hand. Art is pain. Art is suffering.

If insufficient supplies weren’t a big enough problem, navigating this perilous hellscape is made harder by sporadic interruptions from a selection of obtuse A/B scenarios in which you are ambushed by the cops, wizened cadavers, potential love interests and other misfits. Play long enough and you’ll soon twig that the ‘obvious’ answer is seldom the right one. For example, if some familiar figures appear in the distance, opting to holler at them will lead to your head being filled with constant shouting. Game over. Just like in real life.

Occasionally ‘God’ will grant you a reprieve second chance, offering you no solace as you limp hopelessly towards death. On even rarer occasions he will offer you the chance to revive Bonkey – a yes or no option that nearly always glitches the game to death, forcing you to answer in the negative. Game over. Just like real life.

For a game that is, for all intents and purposes, wilfully unplayable, we should hate Bonkey Trek. We should also hate it because, despite being one of the ropiest games ever made, it still has the gall to try and con you with in-app microtransactions for extra lives if you die. And you will die, because it’s a game that is emphatically, defiantly set against you ever beating it.

But, look, we admire it for what it is. It’s a mess. It’s a mess you needn’t suffer through. We did though. We felt the need to suffer through it. You have to suffer for your art, or something. We did. We’ve suffered through Bonkey Trek many a time. All great art is suffering. Bonkey Trek is art. Our heads are full of constant shouting. Game over.