Okay let us cut to the chase here with the minimal amount of preamble and framing text. There is no set-up here or long-winded explanation of what Bioshock is or who made it. I am not even going to waste space reminding you that it is by the same people who made System Shock 2 back in ’99 and that it is possibly the most hyped game released this year. What, Halo 3? Yeah good point. Okay the second most hyped game out this year.

So let us take the plunge and explore the undersea dungeon that is Rapture. Bioshock throws you in at the deep end and quickly has you battling the twisted and tormented denizens of Rapture, an art deco city built beneath the sea by an insane (?) mastermind to further his own vision of humankind’s salvation. From the frequent splicers, common folk who have become corrupted by to many plasmids (More on those in a moment) to the more dangerous ‘boss’ type characters that include an insane prima donna, psychotic Ivan Shandor like surgeons and a multitude of security cameras and automated turrets areas to hinder (Or help when hacked) your progress throughout. 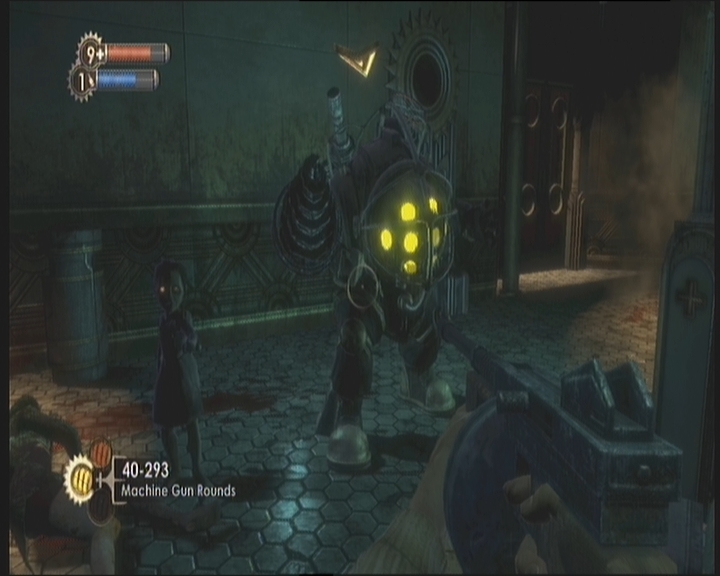 Each area of Rapture also holds a set number of big daddies, huge lumbering guardians of the little sisters who are your main source of adam, the genetic material that powers plasmids. This adam can only be extracted from the sister once the daddy has been taken care of leading to some of the fiercest fights in the game as you try to kill the daddy whilst avoiding their heavy weaponry and wandering splicers trying to get in on the action. The extraction process has two varieties of ‘save’ and ‘harvest’ with harvest yielding more adam in the short term whilst save gives access to different tonics and items later in the game along with different endings to the story and gaming achievements for the Xbox 360 version.

The means to do this range from a low-tech wrench used to bludgeon enemies to the standard range of FPS firearms that can be upgraded to increase damage, range, ammo capacity etc. Your other primary defensive and offensive options are plasmids, genetic modifications that will have you flinging lightning bolts, creating decoy targets and even manipulating objects with telekinesis. Side by side with plasmids are the various tonics that give you a small advantage in some way, be it taking less damage, assisting you with hacking security equipment or making you stealthier.

By using the mundane firearms and exotic plasmids, you explore the different districts of Rapture always fighting to survive and trying to make sense of how you came to be here why you keep having savage flashbacks of disjointed moments from your past. The flashbacks come to form a major part of the plot in Bioshock along with audio diaries that fill in most of the back-story and help you to understand characters motivations along with the more practical applications such as revealing door codes and giving hints to important item locations.

Anybody reading this that has played the aforementioned System Shock 2 might well be having a flashback of their own right about now, and yes you can easily make the comparison of adam for modules and nanites for credits but where Bioshock is different lies in the atmosphere. While System Shock 2 was made with gleaming chrome, cold steel and desolate star fields Bioshock is a different beast that tries to drown you with dank, wet claustrophobia lit by a blinking neon sign advertising the latest wonder of the plasmid revolution. However, it is not just in the graphics that the atmosphere is created here; audio plays as big a part with sweeping classical scores for the opening introductions to Django Rinehart gypsy swing versions of Beyond the Sea adding to the ambience.

Atmosphere is what makes this game special for me, not just what I have said already but all the little touches that add to the experience of playing through the game. I could list them all but for those few of you how have not played this I’ll keep it brief so you can play with minimal spoilage The little film clips that play when you discover a new plasmid or tonic that run like tiny propaganda cartoons. The audio diaries made by concerned parents who have to watch their daughter become one of the little sisters that tug at your heartstrings. Much has been said of the story elsewhere so I won’t go into specifics about the set pieces and story twists (some obvious, some not) It’s not Shakespeare, more Ann Rand but compared to the “Bad guy killed your parents” dross normally inflicted on us it is refreshing to see sub plots and supporting characters of such depth woven throughout the main storyline.

The bad points are few but they do exist from the slightly frustrating respawning splicers to the outright infuriating trick of stealing all the special ammo you have been saving. The game has also been patched lately that seems to leave the Unreal Engine graphics huffing and puffing whilst it takes a few seconds to load textures much like Medal of Honour: Airborne does. Although holding LB+RB whilst the game loads should clear the games memory cache and remove such glitches.

Bioshock will be loved and vilified in equal measure by many for whilst the story is well crafted it weighs in at just under six hours on an average play though but if you take your time to savour the unique atmosphere and fill in the back story you can have a truly amazing experience. Now would you kindly go and play Bioshock.