It’s something we’ve all done at one time or another, no not ‘that’ you naughty-mined person. I’m talking about making up your own words to the music in a videogame. It might be a ballad about Mexican ninjas in GRAW 2 or something more retro like crushing goombas in Super Mario World or my personal favourite bawdy sea shanties during day long sessions on Pirates!

Mr. Brent Black a.k.a. brentalfloss has taken this idea and thanks to his natural lyrical talent not to mention professional background in musical performance ran and then sprinted with it. He’s produced a series of his ‘With Lyrics’ videos on Youtube and later Screwattack that are not only great songs but also wildly funny to boot. So after linking his videos in our forum for the last year I thought I’d pick his brain not only about his videos but his coming album and videogames in general.

PEOWW: So let’s start at the beginning. What inspired you to make the first ‘with lyrics’ video? 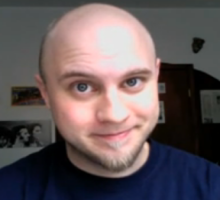 Brent: Honestly, it was just a dumb little idea I had. I was excited about having a new MacBook and I wanted to do something cool with iMovie. I didn’t expect Mega Man 3 with Lyrics to become a phenomenon, but after it got front-paged on College Humor and featured all over the internet, I realized I had to make more “With Lyrics” videos.

PEOWW: What’s your creative process; do you pick a song then write the lyrics or just go with what inspires you at the time?

Brent: Every song has its own unique origin story. Sometimes I can’t get a tune out of my head and I start to attach lyrics, other times I think “Man I love this game, I should really make fun of it on the internet”… but I usually write a lyric and then leave it alone for a while; sometimes months. Then I’ll come back to it and realize “oh wow, this is kind of funny” and I’ll put it into production.

PEOWW: Have you ever received any support or maybe had any problems with YouTube?

Brent: My only problem with Youtube is their inconsistency; I can’t tell what they consider to be prohibited use of copyrighted material. If I could tell, I might be a partner. However, I can’t bite the hand that feeds me too much. If it weren’t for Youtube, I’d be nobody and you wouldn’t be interviewing me.

PEOWW: Does the NES or Nintendo games inspire you particularly to make the ‘with lyrics’ songs or is it something else?

Brent: I grew up playing the NES and SNES, so the music I hold most dear comes from the games on those consoles. But the “with lyrics” series is more inspired by my love of observational humor; early video games had so many ridiculous conventions that are ripe for satire, and that’s usually what attracts me to creating comedic lyrics.

PEOWW: Did you ever try the music maker from Mario Paint?

Brent: My friend was a Mario Paint fiend when it came out in 1992. I wrote tons and tons of songs on it and did my best (with my little 8-year old self) to improve the musical arrangements of the songs that came with the game…and that was BEFORE the emulator program they have now with sharps and flats. Back in my day, we had to put everything in C major or A minor, and we liked it! (Okay, enough crotchety old man…) I wish there were some way to have saved all the stuff I made on that damn game.

PEOWW: Are you working on any new songs you can tell us about?

Brent: Well, I am doing a parody of Night Ranger’s “Sister Christian” about the Mario Bros franchise, as well as an auto-tuned love song version of the Mega Man 3 ending credits theme. Also, I’m preparing to record my first CD, which will probably be called “brentalfloss lives in your computer Vol. 1”

PEOWW: Any chance of the GTA3 song being on the brentalfloss album? 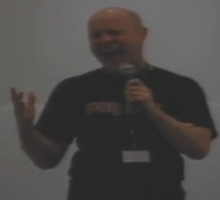 Rocking the mic at SGC.

Brent: The thing about the GTA3 song is that it’s an overlong musical number in three acts, and I’m not sure it would fit with the content on my first CD. Also, it has a chick in it and I can only afford to have my own vocals on this first one, but there’s a very high likelihood of a GTA3 recording and maybe even a music video of it in the next year.

PEOWW: Have you ever thought about starting a VG music based band like Power Glove or The Advantage?

Brent: Actually, yes. The problem with a band is that it takes a lot of time and I currently only have enough time and money to employ myself. I’d love to get a band together one day though; I watch videos of Freddie Mercury at Queen Concerts and think “Why aren’t’ I doing that?”

PEOWW: You’ve done lots of live appearances lately at SGC, Unicon etc. What’s it like meeting and dealing with fans?

Brent: It’s a blast. I think sometimes they expect me to be mean and sarcastic like I am in my “FAQ” videos, but meeting fans is generally awesome and really makes all the effort worth it.

PEOWW: Would you ever consider staging a live performances of VG music in a formal setting say like ‘Tour De Japon’ given your background in musical theatre?

Brent: Actually, I think about it a lot. The problem is that video game enthusiasts and musical theatre enthusiasts rarely occupy the same demographic, so it would have to be a universal franchise like Mario or Zelda. However, I do think the Nintendo-based Broadway musical is on the horizon in the next 10-20 years.

PEOWW: In one FAQ you’ve talked about listening to ‘One-Winged Angel’ from Final Fantasy VII while working out, are there any other VG songs you listen to for doing mundane things? Personally I find driving to the Space Harrier theme very satisfying.

Brent: Video game music completely infests my iPod. I use certain themes to get hyped up when I have to get up early or go running… rock versions of the Ducktales moon theme and techno versions of Mega Man themes figure prominently.

PEOWW: Okay let’s get the standard ‘Top five videogames of all time’ question out the way.

Brent: In no particular order… Final Fantasy IV, Deus Ex, Thief: The Dark Project, Legend of Zelda: A Link to the Past, and Chrono Trigger … I should mention the fact that this list changes daily.

PEOWW: You’ve talked about Deus Ex being a favourite of yours before, what did you think of Yahtzee’s Deus Ex song?

Brent: All I can say is… Yahtzee beat me to the punch. But I’d still like to do something for Deus Ex one day; amazing game.

PEOWW: Okay this is a personal grudge of mine that I’d like your thoughts onâ€¦ Banjo Kazooie BETTER than Super Mario 64. Discuss.

Brent: They’re two games with the same formula. Banjo Kazooie has a better score and more clever use of music, but I honestly think Mario 64 has better pacing; very hard to compare the two.

PEOWW: What did you think of Banjo Kazooie: Nuts & Bolts?

Brent: Honestly, I didn’t play it. I rarely enjoy updates of classic games; it feels like you’re watching a remake of your favourite classic film.

PEOWW: While we’re talking retro games, do you think things like the Wii’s Virtual Console, Playstation Network or the Xbox’s Live Arcade is a good way to get kids into classic retro games or an attempt by greedy publishers to keep wringing money out of old intellectual properties?

Brent: Both. But I’m always happy when I learn about how the new generation of gamers is enthusiastic about the classics. It must be how old people feel when they find out an 18 year old loves Casablanca.

PEOWW: You’ve called yourself “The biggest nerd for the longest time” so do you think the general perception of videogames has changed in the last few years or is it still the domain of the nerds and shut-ins?

Brent: Gaming has become much more mainstream nowadays, and the demographic of core gamers is wider than it has ever been. That said, you still don’t see very many studly jocks and hot cheerleaders at Gaming Cons.

PEOWW: Have you ever been caught up in the ongoing console wars be it Nintendo vs. Sega or Xbox vs. Sony?

Brent: Nope. Every console on the market is owned by at least one of my friends, so I don’t get caught up in it at all.

PEOWW: What new releases (if any) are you looking forward to this winter? 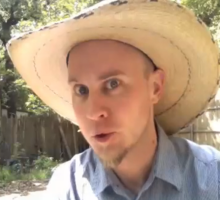 PEOWW: Please don’t say the new Aliens game will be bad, if it is several Peowwsters will most likely commit seppuku. Anyway… We’re always trying to convince people to try games that they might not have otherwise because they ‘flopped’ or they might have a reputation as being a lemon like: Two Worlds, Earth Defense Force or Fuel. Is there any game you’d like to shout a recommendation out to?

Brent: Archon (NES). It’s similar to chess, except that when you land on the same spot as another piece, you duke it out to see who gets to stay on the space. Very fun.

Brent: I honestly can say I don’t bookmark websites because Safari and Firefox do such a good job filling in the rest of a URL when you only know the first few letters.

PEOWW: Thank you for your time Brent, any last words for our readers?

Brent: Stay in school, learn a valuable skill, and be aware that purchasing my upcoming CD will make your penis bigger.

You can watch more ‘With Lyrics’ videos HERE along with Brent’s regular FAQ series and other goodies like his ‘Literally Shorts’ videos. His album is due out this autumn and we’ll try to catch up with him again then.