PEOWW (the Bleoww) recently met Matt Lord, the man behind Karoshi Drop T-Shirts, at Insert Coin ’09 (an event he had a hand in organising).  Karoshi Drop specialises in making tees for the gaming community and, whilst it’s focused mainly on the fighting/shooting end of the spectrum, they also do custom designs including a bunch of Fallout 3-inspired ‘Vault 101’ shirts for some of our PEOWWsters.

We chucked him in front of a camera with Tiq for a little interview action.  The vid is at the bottom of this feature but I decided to catch up with Matt afterwards for a little Q&A to see how the event went.

Rich: So, you were at Insert Coin but you also had a big involvement in getting it set up.  Aside from selling shirts what roles did you have in making the event happen?

Matt: Compared to everyone one else involved I had little to do with actually getting the cabinets to the show. I quickly became the alternative entertainment guy.  If it was not an arcade cabinet, and it was at the show, it had my hand in it somewhere.  So getting Radio Sega and Fastfoot Media on board to DJ was me I was running around a lot of the day meeting and greeting people. So pretty much one 1/100th of the effort and work than anyone else put it. 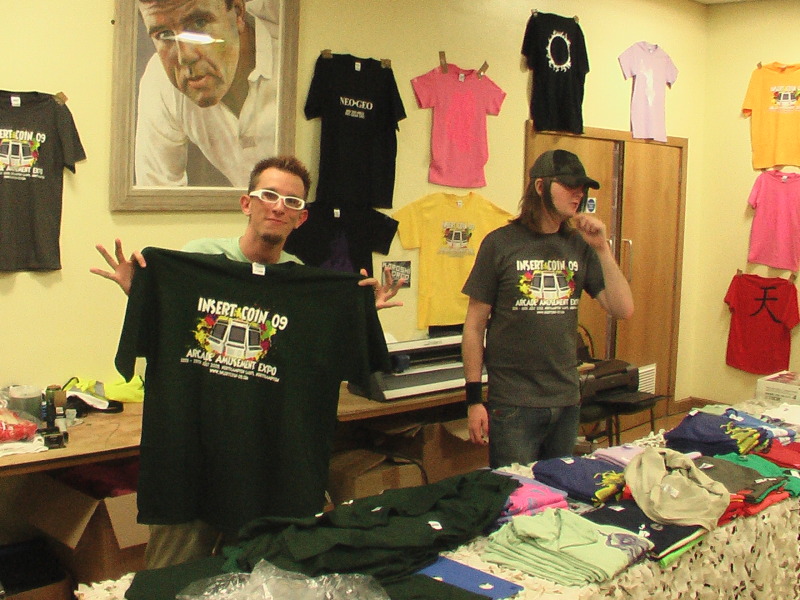 Rich: You were pretty busy throughout the weekend, did the event meet your expectations and did you get much business come your way?

Matt: Yeah in so many ways. The event was awesome and I can’t believe what everyone managed to pull off in the end as pretty much everything was friends helping out.  But think about it, how epic was that weekend? That’s the culmination of two guys and a bunch of their friends coming together and making it happen.  When it started it was meant to be fifty cabinets and a bunch of us arcade nerds bringing down a crate of beer. It quickly became so much more than just us on the Arcade Otaku forum.  We even had a guy come over from Canada with a flight case of all the Type X2 games and a shit load of motherboards. Now thats passion for you.

Matt: I had problems with my stock turning up on the Friday afternoon when i should of been on the road at 9:30am the same day. So I was unable to get a lot of new designs out which i thought would of gone down well at the show. I’m sitting on about 4 or five new designs which I could take to print right now but I just dont have time, but I sold a fair few shirts, most of which were preorders before the event.  I was able to touch base with a lot of my buyers who I’d  never met before and met a lot of new ones as well as set up possible collaborations for the future. Thing is my website is not even up yet so unless you know one of my haunts you cant buy off me, but I’ll sell privately on various forums. I was gutted we did not get to have our Karoshidrop vs Peoww super battle. AI guess I will get another time to hand your asses to you guys hahaha.

Rich: Yeah, but you can keep all that Japanese fighting shite – we’ll be picking Bomb Jack for 2010!  So, Has IC’09 inspired you to make any more retro designs?

Matt: Oh God, I don’t know yet.   Did you see my flyer with the Egret2 cabinet with the tenticles coming out?

Matt: Well that was something me and one of my artists (thanks Mufu) banged out a couple of weeks before the event. I was able to put it on the flyer but it was too soon to go to press on the tees. I really love arcade cabinets, arcade sticks and the like so I’m working a a few bits to do with that. There is also some other stuff which im not allowed to talk about yet but its pretty cool if it happens. Like the coolest thing ever! Can’t say much more than that.

Rich: Karoshi Drop furry ears perhaps?  So, did you get much of a chance to play anything there?  Any favorite games from the event?

Matt: I think over the whole time I was there I had about seven credits total worth of play. I played Aliens, Blazblue, Street fighter 3.3 (thinks for a moment) yeah I also tested my copy of Money Puzzle Exchanger which I picked up off a friend of mine. I had to chuck someone off the Neo 19 at the event but it was cool because he had not seen the game before and was just as eager to see what it was all about.

I was upset that Strike Witches never made it to the show floor. I was really looking forward to playing that. It’s a brand new hori shooter with super hi-res graphics but with Blazblue. KOF12 and Tekken taking up the few wide screen cabinets we had there, something had to be left behind. 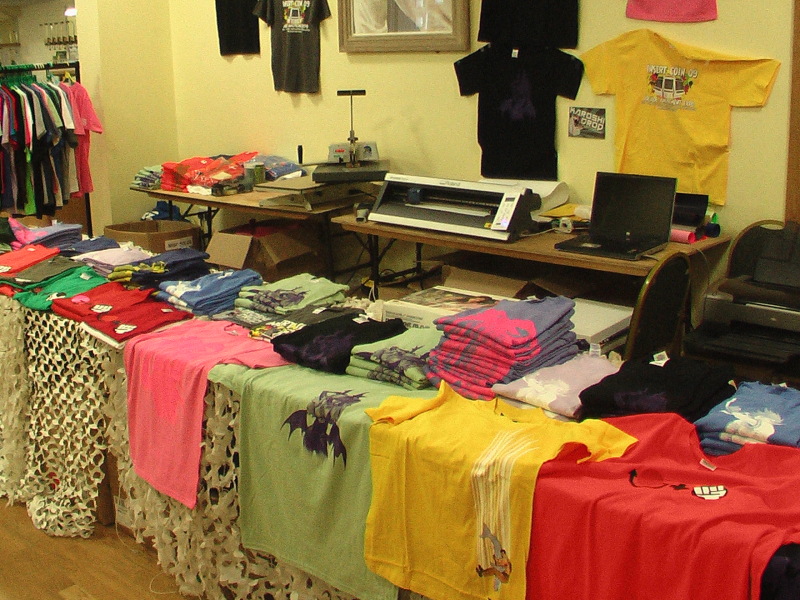 Rich: KaroshiDrop is aimed at gamers primarily.  So have you been a gamer for a long time?

Matt: Oh god yes! I first started playing back on my brothers ZX Spectrum when I was about 5 but it really took off when I moved to Hong Kong and my dad bought my brother and I a PC Engine. It is still one of my main gaming platforms. Living in Hong Kong is when I got my first real taste of arcade gaming.  Back in the Eighties as a kid in Hong Kong you either swam, skateboarded or played video games. I had a gromit in my ear so I could not swim without having to have a very attractive swimming cap on my head and water tight putty in my ears. I used to skateboard a lot and I was pretty good too for an 8 year old but that was put on hold the moment my local arcade got street fighter II in. It’s a shame because before the gromit I was a really good swimmer, competition standard. Games are way more important than that though.

Rich: Yeah, swimming is shit anyway.  At least playing games doesn’t involve contact with other people’s piss, right?  A few of your boys were there from shmups.com and obviously some of those chaps are pretty intense gamers.  Have you 1CC’d any shooters or are you more of a chilled out credit-feeder?

Matt: Intense is a rather strong word heheh. I am neither, I will maybe credit feed a game once just to see what it’s like even then I wont complete it. Then I use the one credit to practice and get a bit better at it. My reaction times are not quite as good as the better shmups players and my hit box awareness is pretty shit too. The short answer would be I’ve never one credited any shmup not even Blazing Star which i owned for a long time and is easy.

I was a bit gutted because they had Muchi Muchi Pork and I was unable to play it. That is the most played game other than Taiko Tatsujin that I played when i was in Japan last year.

Rich: Oh, we’ll challenge you to a shooter next year then.  So, if you’re not a hardcore shoot ’em up player, what is your game?

Matt: Short answer: puzzles and 2D beat ’em ups. I pay a lot of Street Fighter 3.3 and my big puzzle game right now is Money Puzzle Exchanger, but I also play a lot of Magical Drop 3. I have a mean Felicia on Vampire Saviour.

I like Street Fighter 4 (note: like, not love).  It’s a great game but it’s no Street Tighter 3.3.  Other than arcade gaming I also play a lot of RPGs.  Right now I’m playing Odin Sphere which is so pretty for a PS2 game. It had me hooked.

Rich: A very pretty game.  The cuntish boss characters will soon put you off though.  Anyway, did you pick up any goodies at IC’09?

Matt: Hellz yeah! I managed to pick up two arcade cabinets – an Egret2 and a Cyberlead – which I’ve been lusting after for the better part of four or five years. There was Money Puzzle Exchanger which ive been waiting for about a year and a half to get off a guy called Penhoes. King of fighter 2001, Super pang and I nabbed a CPS2 Street Fighter Alpha 3 board too.  It’s all about Rainbow Mika ya know ;-).

Also, a couple of ball tops and an Marquee holder for my Egret2 Cabinet which I did not need to buy because when i opened it up there was one in the base of it hehe. I got one for sale do you need one?

Rich: Not right now!  Will there be an IC’10 and will you be involved in it?

Matt: Just let me give Poolchamp/Alan a phone call. . .  it would seem there is a very, very, super-high probability that it would happen. If I was asked to be involved again I would do what was needed of me. I imagine it would be the official shirts for sale and I would probably loan my cabinets for the event. I’ve not got tech experience and I’ve got no fucking muscles to lift shit, so other than making the shirts and possibly doing interviews like this to help promote the event and the hard work the guys do I will keep doing that. if it was to happen it would not be called IC’10 it would be called Insert Coin Expo or I.C.E . . . but i can neither confirm or deny that it will be happening at this point 😉

If there was to be an announcement, I would imagine it would be in the next couple of weeks. . . If it was to happen.